By Steve Christilaw, as originally posted by The Spokesman-Review 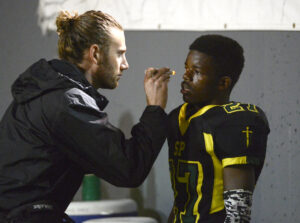 After a great deal of physical therapy, he got up from a wheelchair and, with the help of a cane, walked across the White River Amphitheater stage to receive the Lystedt Adversity Award, a namesake award to be given to students who have demonstrated courage in overcoming long odds.

It’s not the first accomplishment named in Lystedt’s honor.

In 2006, playing in a middle school football game, Lystedt suffered a blow to his head. He returned to the game and was hit again, this time suffering a catastrophic brain injury that had him on life support for a week. His recovery required intense physical therapy. It was nine months before he could speak. It was two years before doctors could remove his feeding tube.

Walking across the stage at graduation was as emotional as it was a continuing inspiration.

Lystedt and his family inspired Washington state’s groundbreaking Zackery Lystedt Law, a bill signed into law by then-Gov. Christine Gregoire that is a model for similar legislation in 40 states and the District of Columbia.

To understand the broad reach of the law, consider that only 21 states require bicyclists to wear a helmet, 32 have primary seat belt laws and 19 require motorcyclists to wear helmets.

Specifically, the law prohibits young athletes who are suspected of sustaining a concussion from returning to the game without the approval of a licensed health care provider.

Dr. Stanley Herring, a co-founder and senior medical adviser to the UW Sports Institute, calls the law a major success.

“Since (enacting the law), we’ve seen a transformation in how communities view sports-safety legislation,” he said in a report marking its 10th anniversary. “This law was only associated with nominal costs, but it made youth sports safer. It saved lives.”

Experts insist that there is much we do not know about chronic traumatic encephalopathy, the dementia-like condition commonly known as CTE that afflicts many professional athletes. What we do know is that concussions are its primary contributing cause. All sports carry a level of risk of head injury, as does walking on an icy sidewalk.

We also know that a brain that has been concussed is vulnerable. A second trauma can be both catastrophic and fatal.

The Spokane high school football community knows that all too well.

In 2009, junior Drew Swank was a defensive back on a fledgling Valley Christian football team. He was concussed in a game and returned to play the next week. After receiving a blow to his head in Washtucna, he staggered off the field and collapsed.

The Lystedt Law is designed to make certain that no player returns to play prematurely after suffering a concussion.

The Washington Interscholastic Activities Association has placed a great emphasis on understanding head injuries and recognizing symptoms of concussions, conducting clinics at its annual summer coaches school to help them do so.

Schools in the Spokane area hired trainers and gave them authority to pull players out of action if they suspect a possible head injury and give them final say on whether they return to play.

“The kids are doing good with all this, they understand that we have their best interests at heart here,” West Valley football coach Craig Whitney said. “We want kids to enjoy the game, but we aren’t going to risk the rest of their life to do that and I think the kids understand that.”

An emphasis on understanding concussion and how the brain heals after receiving trauma has led to improved treatment protocols. For example, doctors now believe that the recovery period needed to completely heal can be longer than was originally thought.

But the most important advancement in dealing with head injuries and the complications that arise from them is simply this: coaches, trainers, teachers, administrators, players and parents are more aware that there is a risk involved in all sports, not just contact sports – and they are more aware of what the symptoms are.

Community awareness has also grown as high-profile athletes come forward with their own stories of dealing with concussions and CTE.

The downtown Spokane Library hosted a seminar on the subject, with more than a half-dozen organizations that deal with head injuries there to offer information and assistance.

And a number of changes and improvements have been made to equipment– specifically football helmets.

New helmets feature a lightweight design that mimics the way a car bumper reacts – spreading out the impact across the surface of the helmet, instead of allowing it to be transmitted to the head.

The new helmets carry a higher price tag, which could limit their availability to youth sports programs, however.

Rules designed to eliminate helmet-to-helmet impacts have served to reduce such contact.

“We work really hard to teach kids the proper way to tackle,” first year University High Coach Kaleb Madison said. “There is nothing more important than keeping our kids safe.”

Like most programs, the Eagles have an athletic trainer on the sideline and she has complete authority to pull a player out of a game if she suspects he or she has suffered a head injury.

“What’s been interesting has been the parents,” he said. “The protocol is that a player cannot return to play until our medical people have signed off on them. But we still get parents coming to us and saying, ‘ OK, my kid can play – here’s a note from his doctor.’ ”

Nilles tells them that he’s sorry, but that’s not the school’s protocol. That’s not how the system works.

“I have to tell them that kids can’t return to play until they’re cleared by our doctor,” he said.