Physically active youngsters seem to have an advantage when it comes to academic achievement. They retain more information in memory to process actions and decisions. They learn, focus and manage their impulses better than others. And regions of their brains critical to mental performance appear to be larger and to connect better with one another.

In short, many scientists who study children believe that kids who are physically active learn more quickly and efficiently and behave better.

The research exploring these benefits is stronger for children ages five to 13 years than it is for younger children or adolescents. And although the impact of physical activity on learning is significant, its influence on behavior may be even greater.

“The scientific evidence continues to build—physical activity is linked with even more positive health outcomes than we previously thought,” according to the introduction to the 2018 Physical Activity Guidelines for Americans, 2nd edition.

The Physical Activity Guidelines recommend that children and adolescents ages 6 through 17 years do at least 60 minutes of moderate-to-vigorous physical activity daily. In the Guideline’s Scientific Report and other recent reviews, scientists analyzed the impact of exercise on the brain health of children. In analyses of dozens of studies, they found:

Although these findings are based on the best available research, the authors of these reports make it clear that their conclusions could change with future research involving more children or better and different methods.

Success in school often heralds a child’s fortunes later in life. “[A]cademic achievement is a predictor of future job opportunities and adult health,” note the IOM authors. That means the link between physical activity during childhood and intellectual and academic attainment is potentially life altering. 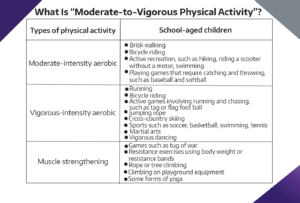 What to Know About the Male Athlete Triad
Impacts of Sleep on Athletic Performance
Hydration in the Heat for Young Athletes
Do Team Sports Offer Health Advantages that Other Activities Do Not?